You are here: Home / Spiritual Disciplines / How to Have Forgiveness from the Heart 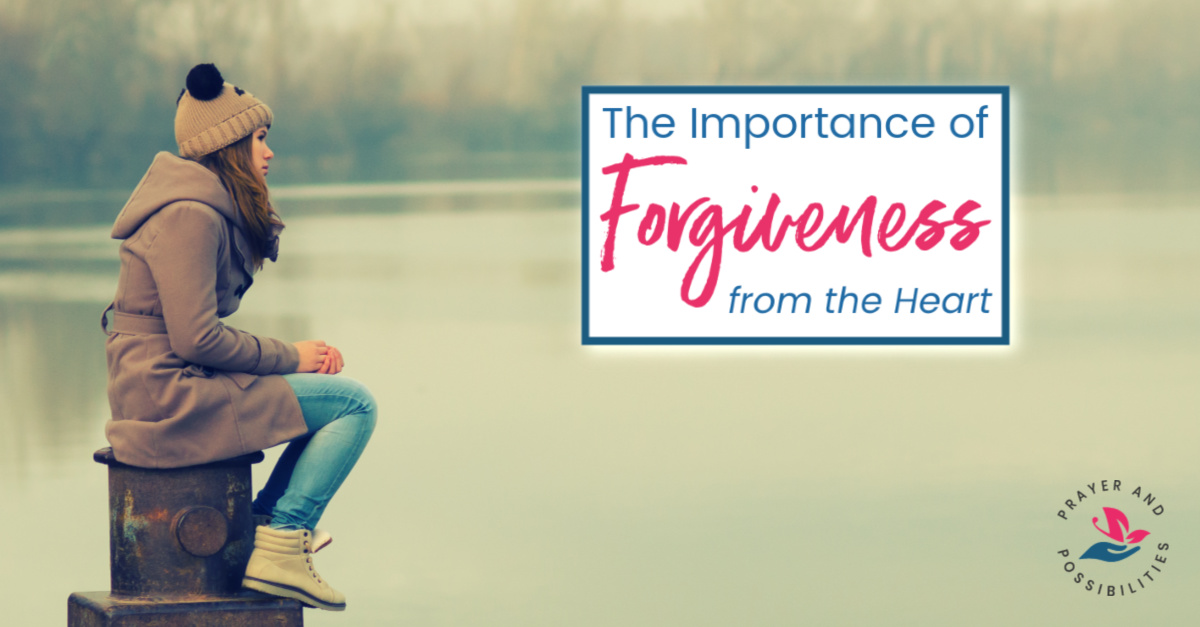 Say you’re sorry to your sister. Now, say something nice to your bother and makeup. Or vice versa. Variations of this scene play out in my house daily. My children love each other, yet because they’re so close, they fight like cats and dogs. So, we have plenty of opportunities to work on apologies and forgiveness.

As I’ve watched this dynamic play out time and again, I’ve begun to realize that while an apology is an action (even one I can force them to do), forgiveness is harder. Forgiveness from the heart can’t be forced. It can’t be demanded. It can’t be done if your heart’s not ready and willing.

Forgiveness is a State of the Heart, Not an Action

Forgiveness is more about the softening of your heart toward someone who’s wronged you, rather than any particular action or words. It’s a state of your heart, a forgiving heart filled with love instead of bitterness. It’s a heart softened by God to love others as He loves you.

“So it is with the spirit of forgiveness; it ceases to be forgiveness if it is a matter of count and reckoning; it is a state of heart which will manifest itself naturally, and as occasion for it arises; and just as the sight of beauty draws forth admiration, and as the presence of suffering awakes compassion, so the sight of penitence, if you believe it to be genuine, calls forth the spirit of forgiveness, and you should no more ask, How often must I forgive, than how oftenest I love, or pity or admire?” (From a sermon on Christian Forgiveness by the Rev. Archibald Watson, 1880)

Someone at work once falsely accused me of something I didn’t do. I was hurt that she’d question my character in this way. I was angry and refused to speak to her for weeks.

As time went on, bitterness began to set in. I’d moved beyond the initial issue and my innocence had been proven, yet now I was bitter and resentful.

A heart full of bitterness and resentment is a hard way to live, especially when you’re reminded of it every day.

I knew I had to forgive her, but I also knew it was going to be difficult.

I talked to her and said words of forgiveness, but my heart was still holding a grudge.

The harder work was true forgiveness from the heart. It took weeks to let it all go, but when I finally did it lightened my heart and removed the bitterness.

“Get rid of all bitterness, rage and anger, brawling and slander, along with every form of malice. Be kind and compassionate to one another, forgiving each other, just as in Christ God forgave you.” (Ephesians 4:31-32 NIV)

Forgiveness from the Heart is an Attribute of Your Character

Apologies are something you do. They’re an action. Now, you may have some heart work to do in order to truly feel apologetic and repentant.

Forgiveness is harder. It’s not an action, not just words you can say to someone. Rather, forgiveness comes out of your heart and your character.

“The forgiveness of others is not an act by itself, which can be separated from the Christian character, or added to it at will. It is part of that character and inherent in it. It comes of God and of the spirit God creates by His forgiving love.” (From a sermon on Christian Forgiveness by the Rev. Archibald Watson, 1880)

As you learn to live as Jesus teaches, you can begin to live with a heart for forgiveness. It becomes an extension of the love, compassion, mercy, and grace that you’ve received from Jesus and that you learn to freely give to others. Forgiveness can become a way of life if you’ll only let it.

Do you have bitterness in your heart? Do you have someone in your life who you need to forgive?

It’s not easy to forgive, especially those who have done horrible things to us or our loved ones. So, how will you begin to open your heart to forgiveness today?

How will you accept God’s forgiveness, His mercy, and grace? Then, how will you extend it to someone else?

[This post is part of the Visible Faith series. Click here to learn more about this series on how to live a vibrant, visible faith.]