You are here: Home / Trust God / Train Your Heart to Trust God Step by Step 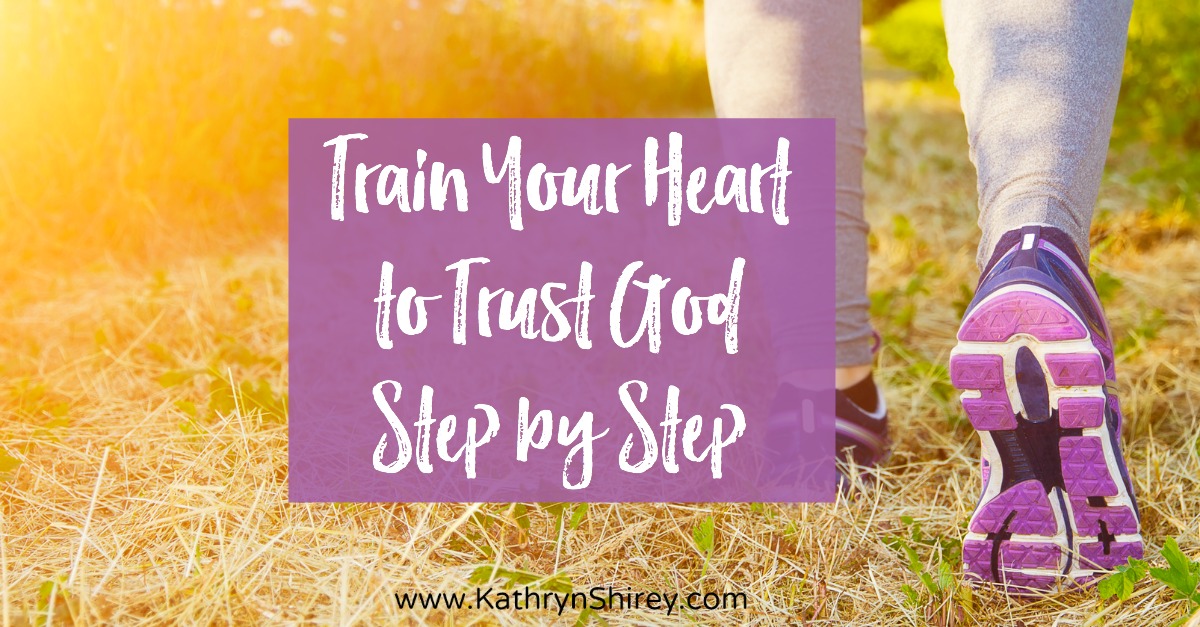 I didn’t know how crucial that first step of obedience would be. That first step that set in motion so many next steps. I only knew that I wanted more in my life. I wanted to experience the kind of faith I’d read about in the Bible. The kind of faith I’d seen in others who seemed strong, at peace, and even joyful no matter what life brought their way. I wanted to know what it would be like to say “yes” without hesitation and trust God fully for the rest.

Little did I know what the journey ahead would hold.

The story of Abraham uprooting his family and setting off on a journey to the unknown (Genesis 12) was both an inspiration and puzzlement for me. When God said, “Go from your country, your people and your father’s household to the land I will show you.” (Genesis 12:1), how was Abraham able to say “yes” so easily? Perhaps he took the time to discuss and debate the decision, but all we’re given in the passage is, “So Abram went, as the Lord had told him.” Immediately, without question, in pure obedience, Abraham packed up his family and followed where God led.

Trust in God Begins with a Step

The faith of Abraham to say “yes” to leave his home and follow God into the unknown surely wasn’t his first step of obedience and faithfulness. It likely came after numerous untold steps of saying “yes” to trust God. Abraham had no doubt been in training for that big “yes” for years. After all, he was 75 years old when God called him to go. The faith we see recorded in Genesis had been formed, tested, and refined over those 75 years, bringing him to the pivotal moment in Genesis 12.

As significant as Abraham’s “yes” was to leave Harram and follow God into the unknown, it was only the beginning of the story. What follows are countless other trials and decisions for Abraham. Moments of deciding whether to say “yes” to God and trust him to lead through the next challenge. God was indeed faithful to each “yes” Abraham made, leading him, equipping him, and protecting him.

Faith is Forged through the Journey of Steps

What about you? How can you also experience an Abraham-like faith? How can you be so prepared to place your trust in God when the big moments come in your life?

The story we know of Abraham begins with a step. He didn’t know where he was going, why he was going, or what he would face along the way. He simply said “yes” and went. Then he continued to take step after step in obedience and trust, each next step deepening his faith and bringing him closer to God.

“By faith Abraham, when called to go to a place he would later receive as his inheritance, obeyed and went, even though he did not know where he was going.” (Hebrews 11:8)

Your first step with God may not be this big. We’re not all called to move to a new place, but obedience and trust do require that we step beyond our comfortable, beyond our status quo, beyond our current circumstances. It’s in each step, as we learn we trust God through the small challenges, that we prepare to trust him in the big storms life brings.

Train Your Heart to Trust God Step by Step 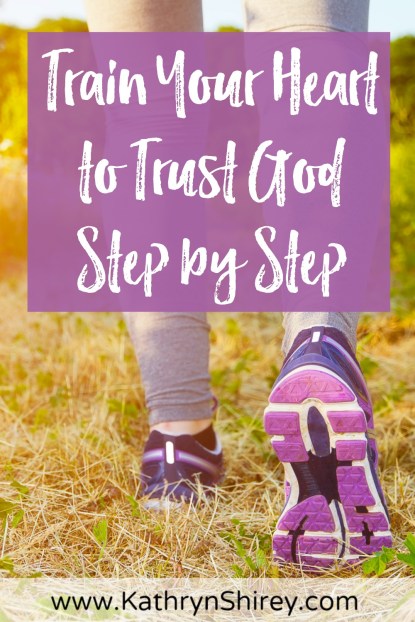 Each step we take with God is training our hearts to know him and trust his power. I began to take one step at a time as God called me out of my comfortable. Send this email. Talk to this person. Say yes to that role. Write these words. Step-by-step my faith began to grow and I learned to trust God’s provision and guidance.

Do you trust me? Yes, Lord.

When the first trial came, I’ll admit I didn’t feel ready. It knocked me off my feet and threw me off course for a while, but then I heard God whisper to my heart. Don’t you trust me? I remembered how faithful he’d been so far on this journey and I knew he’d be by my side through this too. He reminded me I’d make it through, even though the road ahead was going to be difficult. Yes, Lord, I trust you.

As my training continued, the steps became bigger. At times, I was able to run forward, letting God fill my sails with his wind. Other times, the steps were more difficult, requiring every bit of faith I could muster. Yet, each step continued to show me God’s great faithfulness and power. Each step grew my faith ever more.

Each of these steps, trials, and mini-tests of faith were my training ground to learn how to live by faith. We don’t naturally face life’s trials with peace and inner strength. We don’t naturally praise God through our grief and struggle. Yet, we can train in faith in order to reset our typical responses. We can learn instead to face life’s trials with peace and joy, knowing God is in charge and by our side. We can walk through the fire because we’ve experienced his faithfulness time and again as we’ve taken steps of faith with him.

As I huddled in the back of my closet, crying my eyes out over a diagnosis I hadn’t wanted to hear, I heard that familiar whisper. Don’t you trust me?

I wanted to wallow in my grief and self-pity a while longer. I wanted to take charge and go find the solutions on my own. I wanted to do anything but sit back and trust in a power other than my own. But, hadn’t God had been there for all the steps leading to this moment? Hadn’t he led me this far and shown his faithfulness each time? Why would I expect anything less this time? Hadn’t I been in training through all the previous steps of obedience and trust for a moment such as this?

By faith Abraham, when called to go to a place he would later receive as his inheritance, obeyed and went, even though he did not know where he was going. By faith he made his home in the promised land like a stranger in a foreign country; he lived in tents, as did Isaac and Jacob, who were heirs with him of the same promise. For he was looking forward to the city with foundations, whose architect and builder is God. And by faith even Sarah, who was past childbearing age, was enabled to bear children because she considered him faithful who had made the promise. And so from this one man, and he as good as dead, came descendants as numerous as the stars in the sky and as countless as the sand on the seashore.

All these people were still living by faith when they died. They did not receive the things promised; they only saw them and welcomed them from a distance, admitting that they were foreigners and strangers on earth. People who say such things show that they are looking for a country of their own. If they had been thinking of the country they had left, they would have had opportunity to return. Instead, they were longing for a better country – a heavenly one. Therefore God is not ashamed to be called their God, for he has prepared a city for them.

By faith Abraham, when God tested him, offered Isaac as a sacrifice. He who had embraced the promises was about to sacrifice his one and only son, even though God had said to him, “It is through Isaac that your offspring will be reckoned.” Abraham reasoned that God could even raise the dead, and so in a manner of speaking he did receive Isaac back from death. (Hebrews 11:8-19 NIV)