You are here: Home / Trust God / Why We Can’t Do It All And Still Follow Where Jesus Leads 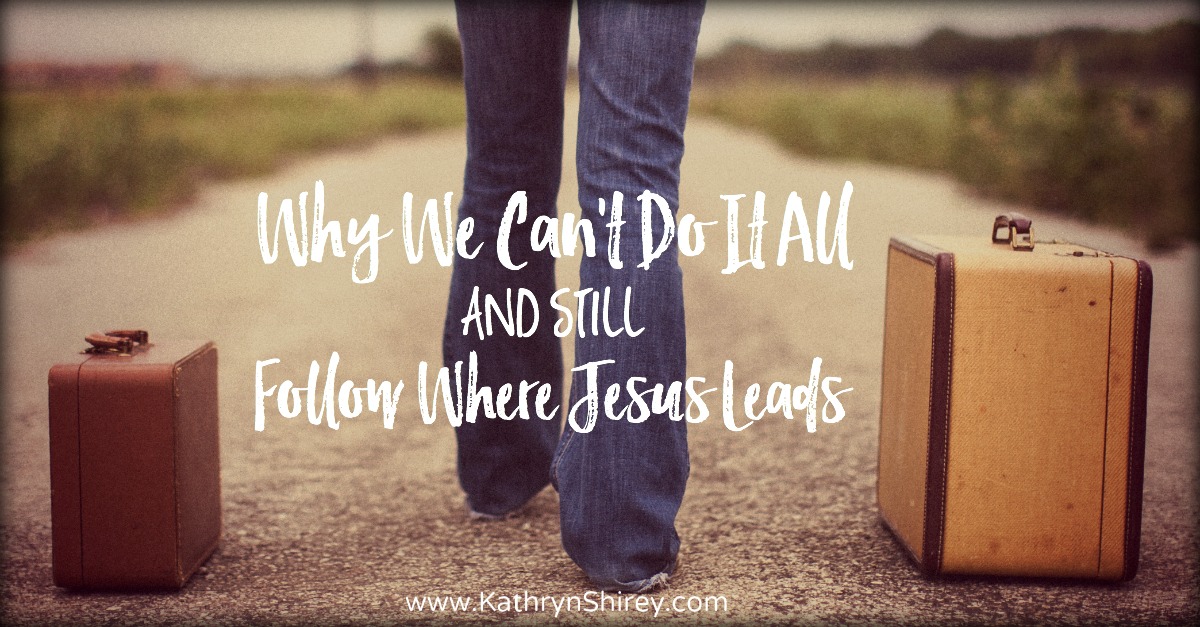 It may sound logical, simple even, yet it’s been a hard lesson to learn. We like to think we have an infinite capacity for family, work, church, volunteer events, and more, yet there really is a point at which too much is really too much. Did know you that when you reach that point, you actually become less able to get anything done?

To follow where Jesus leads, we have to lay down that which distracts our focus on him.

The disciples couldn’t do it all either. Each man Jesus called had to give something up. Jesus doesn’t call us to follow him yet stay exactly where we are. He calls out, “Come, follow me…”, asking us to leave behind that which weighs us down so that we can follow him completely, entirely, with our whole being. It might be leaving behind a job, a friendship, an attitude, a worry, a control.

Therefore, since we are surrounded by such a great cloud of witnesses, let us throw off everything that hinders and the sin that so easily entangles. And let us run with perseverance the race marked out for us, fixing our eyes on the Jesus, the pioneer and perfecter of faith. (Hebrews 12:1-2)

Some, like Peter and Andrew, had to give up their careers. It wasn’t that they had bad jobs, but Jesus needed their full attention so he could train them to step into new careers. (Matthew 4:18-22)

Some had to give up bad habits and lifestyles, such as Matthew giving up his job as a tax collector. Jesus needed him to leave behind a corrupt heart and bad choices. (Matthew 9:9)

Each of the disciples had to give up their control and simply trust Jesus. Trust Jesus with their future, how they’d provide for their families, where they’d sleep and what they’d eat. Trust Jesus that they’d made the right decison to say “yes” and follow him.

For some, Jesus calls us to serve him where we are, in our homes, in our jobs, in our own communities. It’s not always about leaving behind what we have, but about getting focused. After Jesus cured Legion of evil spirits, Legion begged to go with Jesus. He was so grateful, but also probably fearful of his community’s reaction to him after this dramatic healing. Jesus told him: “Go home to your own people and tell them how much the Lord has done for you, and how he has had mercy on you.” He was asked to stay in place, yet cast off fear and feelings of ‘less than’ in order to share about Jesus. The next verse tells us: “So the man went away and began to tell in the Decapolis how much Jesus had done for him. And all the people were amazed.” (Mark 5:1-20) 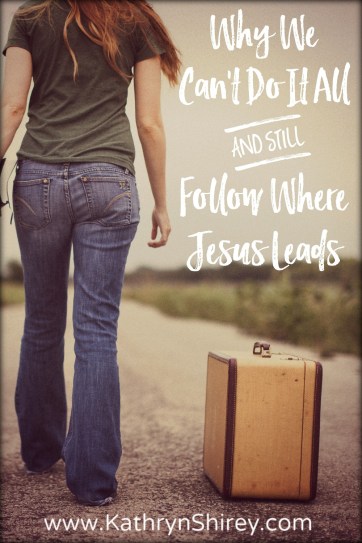 Still others were asked to follow but were unable to let go. One man wanted to wait until he had buried his father. Essentially, he wanted to go home and think it over, consult with friends and family, finish out his current season of life and get to a place where he was better able to go. Yet, Jesus said come now, come anyway, come just as you are. Jesus said life will go on and your family will adjust, yet the man couldn’t let go. (Luke 9:61-62)

Another man greatly desired to follow Jesus, but couldn’t let go of his money and personal possessions. He wanted to follow, but hadn’t fully considered the cost and wasn’t ready to make that kind of sacrifice. (Luke 18:22-25) We’re not all called to sell our possessions and give away all we have, but we are to put God first and let go of the hold our money has over our lives.

“No one can serve two masters. Either you will hate the one and love the other, or you will be devoted to the one and despise the other. You cannot serve both God and money.” (Matthew 6:24)

What do you need to lay aside?

So, where is Jesus calling you? Where is he calling me? What is Jesus asking us to give up? Do you need to give up bad habits, give up certain attitudes, give up friends who are pulling you away from Jesus, give up a dream that’s not in line with God’s dream for your life, or even give up a job? What if what God has in store for us when we say “yes” is even better than what we’re giving up? We won’t ever know unless we actually first let go and follow.

“The disciple simply burns his boats and goes ahead. He is called out, and has to forsake his old life in order that he may ‘exist’ in the strictest sense of the word. The old life is left behind, and completely surrendered. The disciple is dragged out of his relative security into a life of absolute insecurity (that is, in truth, into the absolute security and safety of the fellowship of Jesus), from a life which is observable and calculable (it is, in fact, quite incalculable) into a life where everything is unobservable and fortuitous, out of the realm of the finite (which is in truth the infinite) into the realm of infinite possibilities (which is the one liberating reality).” ~Dietrich Bonhoeffer, The Cost of Discipleship

What do you need to let go or set aside so that you can fully follow Jesus and go where he leads?

Sign up today for weekly prayers and spiritual encouragement!

Previous Post: « Why You (and I) Need To Stop Juggling And Find Focus
Next Post: When We Can’t Fix It On Our Own »

Ready to Ignite Your Faith?

Join 16,000+ others in the Prayer & Possibilities community for weekly prayer and spiritual encouragement.

Ready to Ignite Your Prayers?

Ignite your prayer life with these 20+ ways to pray. Free printable prayer cards as my gift to you when you join our 'Prayers + Possibilities' newsletter for weekly prayer and spiritual encouragement.

Join the 'Prayer and Possibilities' weekly newsletter to deepen your prayer life and find renewed hope through God. As a thank you, I'll send you these FREE Pray Deep Prayer Cards. Ignite your prayer life by exploring over 20 different ways to pray.
** No spam ever - only faith-filled encouragement. Disclosure & Privacy Policy
Learn to Pray as Jesus Taught. Get your FREE collection of prayers based on the Lord's Prayer.LEARN MORE
+ +