You are here: Home / Uncategorized / The World’s “Less Than” Or God’s “More Than”? 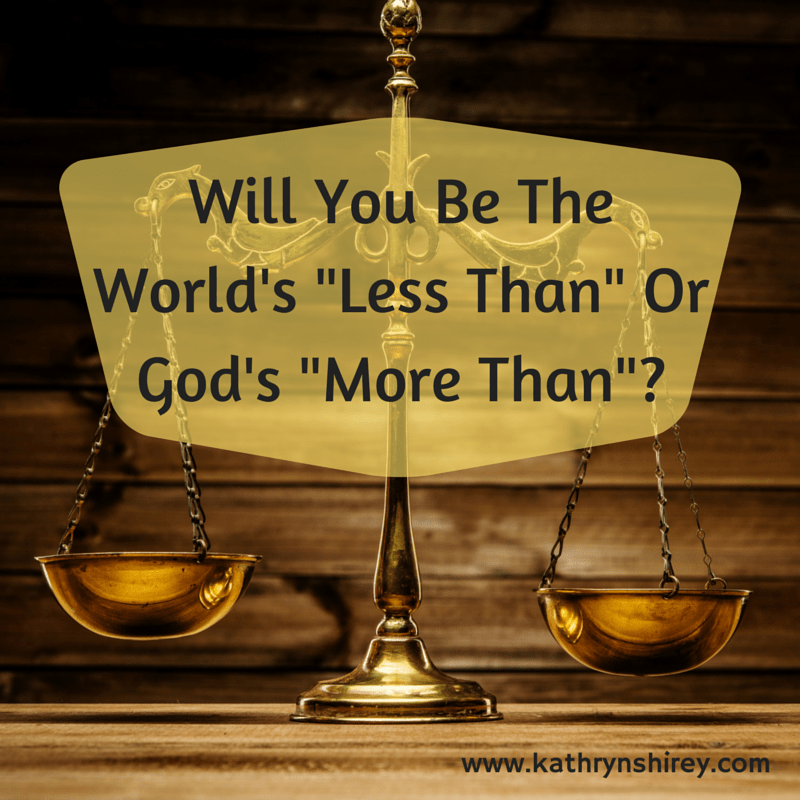 We must have watched the movie Dirty Dancing dozens of times in college and the final scene is particularly etched in my memory. In the movie, set in the summer of 1963, the Houseman family has taken their two teenage daughters to a resort in the Catskills. The youngest daughter (Jennifer Grey), Baby, develops a relationship with the lead dance instructor (Patrick Swayze), Johnny. Through the course of events that unfold through the movie, her father forbids her to see him again. Her father also becomes disappointed in his favored daughter and leaves her feeling “less than.”

In the final scene, the since-fired Johnny returns for the final dance of the season. He walks over to the Houseman’s table, where he famously says, “Nobody puts Baby in a corner,” and then leads Baby out to perform the final dance. In this final scene, Baby shines in the dance she’d been practicing with Johnny, splendidly performing a lift she’d never before completed successfully.

Will we allow the world to label us as “less than” or listen to God’s “more than”?

How often do we hide in the corner, feeling “less than”? We let the events of our lives define who we are and what we are capable of doing. We let the hurtful words of this world cut deep into our souls. We listen to the voice of the Enemy who tries to undermine God’s promises and love for us.

We don’t need Patrick Swayze to lead us onto the dance floor to feel special, instead we only need to look to the One who is greater than all. Imagine God reaching his hand out toward you, saying “Nobody puts <your name here> in a corner” and leading you out into the greatest moments of your life.

“Nobody puts Gideon in a corner”

Let’s see how God did just that with Gideon. During Gideon’s life, the Israelites were being heavily oppressed by the Midianites. The situation was so bad that the Israelites had been forced into hiding, living in caves within the mountains. Any time the Midianites caught sight of crops or livestock, they’d move in like locusts and destroy everything in sight.

Gideon was hiding in a winepress, threshing his wheat there so he wouldn’t be seen by the Midianites. Threshing wheat is best done on a hill in the open air, so the wind can blow away the chaff and dust, leaving behind the grains. A winepress, on the other hand, would be a sunken, rocky hole in the ground. A place with no wind to help separate the grains from the chaff. Gideon was terrified of being seen by the Midianites so he labored extra hard in this more protected place.

The angel of the Lord came and sat down under the oak in Ophrah that belonged to Joash the Abiezrite, where his son Gideon was threshing wheat in a winepress to keep it from the Midianites. When the angel of the Lord appeared to Gideon, he said, “The Lord is with you, mighty warrior.” – Judges 6:11-12 (NIV)

Our perfect God sees infinite potential in our imperfect selves

Gideon certainly didn’t feel equipped to be use by God for anything, certainly not to be a “mighty warrior.” He felt ordinary and afraid. He had wondered if God abandoned him and his people as they suffered under the Midianites. His own family had abandoned God and turned to other gods. He felt his family was the least in his tribe, and he was the least in his family.

Yet, God chose Gideon to lead the Israelites into battle to defeat the Midianites. God chooses you, too, to do far more than you feel capable of doing on your own.

The Lord turned to him and said, “Go in the strength you have and save Israel out of Midian’s hand. Am I not sending you?”

God’s power amplifies our abilities when we say “Yes”

Gideon probably felt far from being a “mighty warrior” as he threshed wheat in the winepress, yet God saw into his heart and knew how He could use Gideon. God’s power will amplify our abilities when we say “yes” to His call.

The Lord answered, “I will be with you, and you will strike down all the Midianites, leaving none alive.” – Judges 6:16 (NIV)

Are you feeling “less than” today? Less than capable of where God is calling you? Less than perfect? Less than others you see chasing similar dreams? Less than worthy of the dream tugging at your heart?

Let Gideon’s story encourage to step out of that corner, out of the winepress, and trust God to amplify your abilities. You are a mighty warrior, capable of far more than you think when you allow God to work through you. 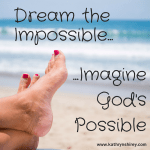 Previous Post: « Learning the Secret Ingredient for Big Dreams
Next Post: Will Today Be Your Day One? »