You are here: Home / Uncategorized / Prayer for the Second Sunday After Epiphany 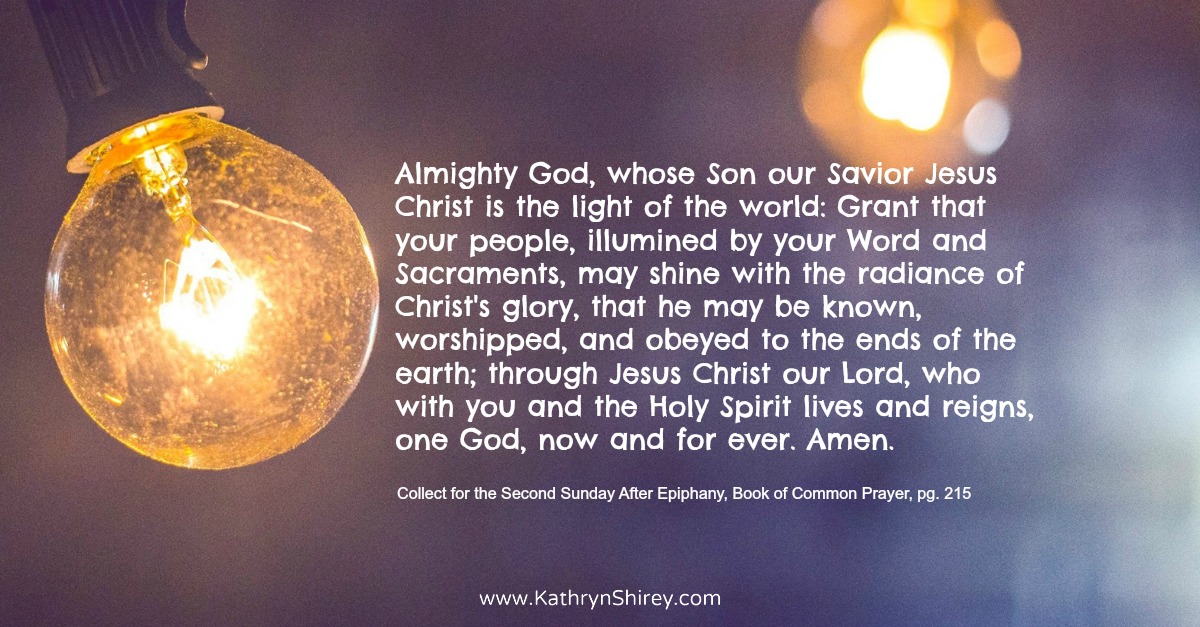 Almighty God, whose Son our Savior Jesus Christ is the light of the world: Grant that your people, illumined by your Word and Sacraments, may shine with the radiance of Christ’s glory, that he may be known, worshipped, and obeyed to the ends of the earth; through Jesus Christ our Lord, who with you and the Holy Spirit lives and reigns, one God, now and for ever. Amen.

Collect for the Second Sunday After Epiphany, Book of Common Prayer, pg 215

John saw Jesus coming toward him and declared, “Here is the Lamb of God who takes away the sin of the world! This is he of whom I said, ‘After me comes a man who ranks ahead of me because he was before me.’ I myself did not know him; but I came baptizing with water for this reason, that he might be revealed to Israel.” And John testified, “I saw the Spirit descending from heaven like a dove, and it remained on him. I myself did not know him, but the one who sent me to baptize with water said to me, ‘He on whom you see the Spirit descend and remain is the one who baptizes with the Holy Spirit.’ And I myself have seen and have testified that this is the Son of God.”

The next day John again was standing with two of his disciples, and as he watched Jesus walk by, he exclaimed, “Look, here is the Lamb of God!” The two disciples heard him say this, and they followed Jesus. When Jesus turned and saw them following, he said to them, “What are you looking for?” They said to him, “Rabbi” (which translated means Teacher), “where are you staying?” He said to them, “Come and see.” They came and saw where he was staying, and they remained with him that day. It was about four o’clock in the afternoon. One of the two who heard John speak and followed him was Andrew, Simon Peter’s brother. He first found his brother Simon and said to him, “We have found the Messiah” (which is translated Anointed). He brought Simon to Jesus, who looked at him and said, “You are Simon son of John. You are to be called Cephas” (which is translated Peter).

Previous Post: « 5 Steps to Restart a Resolution After You’ve Slipped
Next Post: Prayer for the Third Sunday After Epiphany »