You are here: Home / Uncategorized / Prayer for the Last Sunday after Epiphany 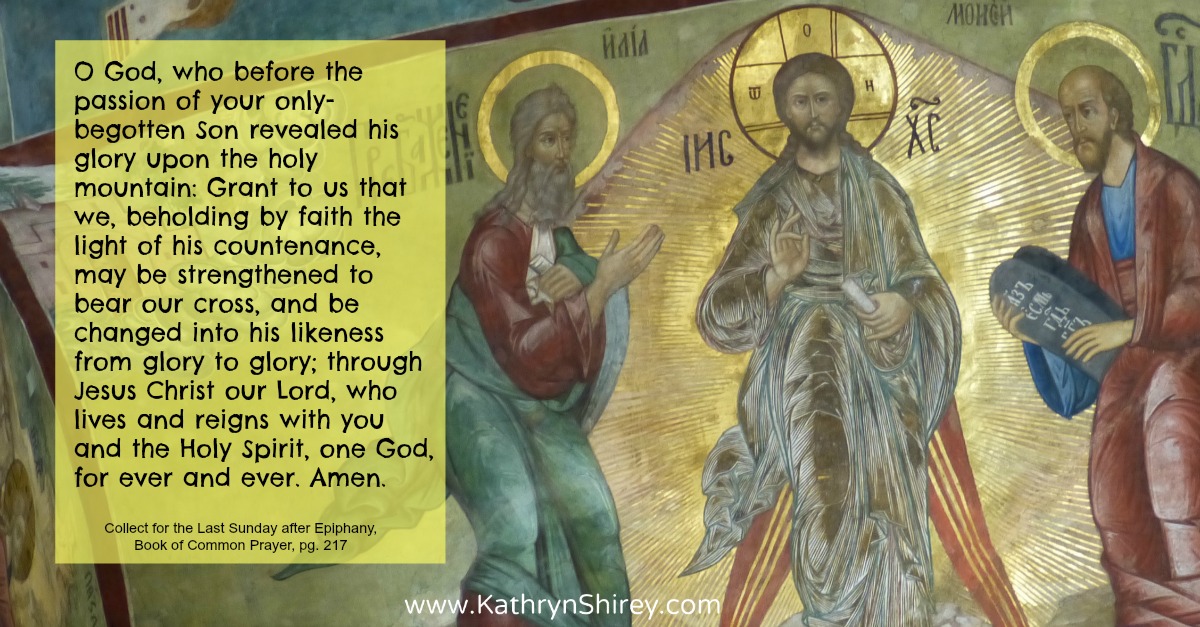 O God, who before the passion of your only­begotten Son revealed his glory upon the holy mountain: Grant to us that we, beholding by faith the light of his countenance, may be strengthened to bear our cross, and be changed into his likeness from glory to glory; through Jesus Christ our Lord, who lives and reigns with you and the Holy Spirit, one God, for ever and ever. Amen.

(Collect for the Last Sunday after Epiphany, Book of Common Prayer, pg. 217)

Six days later, Jesus took with him Peter and James and his brother John and led them up a high mountain, by themselves. And he was transfigured before them, and his face shone like the sun, and his clothes became dazzling white. Suddenly there appeared to them Moses and Elijah, talking with him. Then Peter said to Jesus, “Lord, it is good for us to be here; if you wish, I will make three dwellings here, one for you, one for Moses, and one for Elijah.” While he was still speaking, suddenly a bright cloud overshadowed them, and from the cloud a voice said, “This is my Son, the Beloved; with him I am well pleased; listen to him!” When the disciples heard this, they fell to the ground and were overcome by fear. But Jesus came and touched them, saying, “Get up and do not be afraid.” And when they looked up, they saw no one except Jesus himself alone.

As they were coming down the mountain, Jesus ordered them, “Tell no one about the vision until after the Son of Man has been raised from the dead.”

Previous Post: « Prayer for the Seventh Sunday after Epiphany
Next Post: 7 Steps to Transformational Change that Lasts »