You are here: Home / Spiritual Disciplines / How To Find Peace in a Not-So-Peaceful World 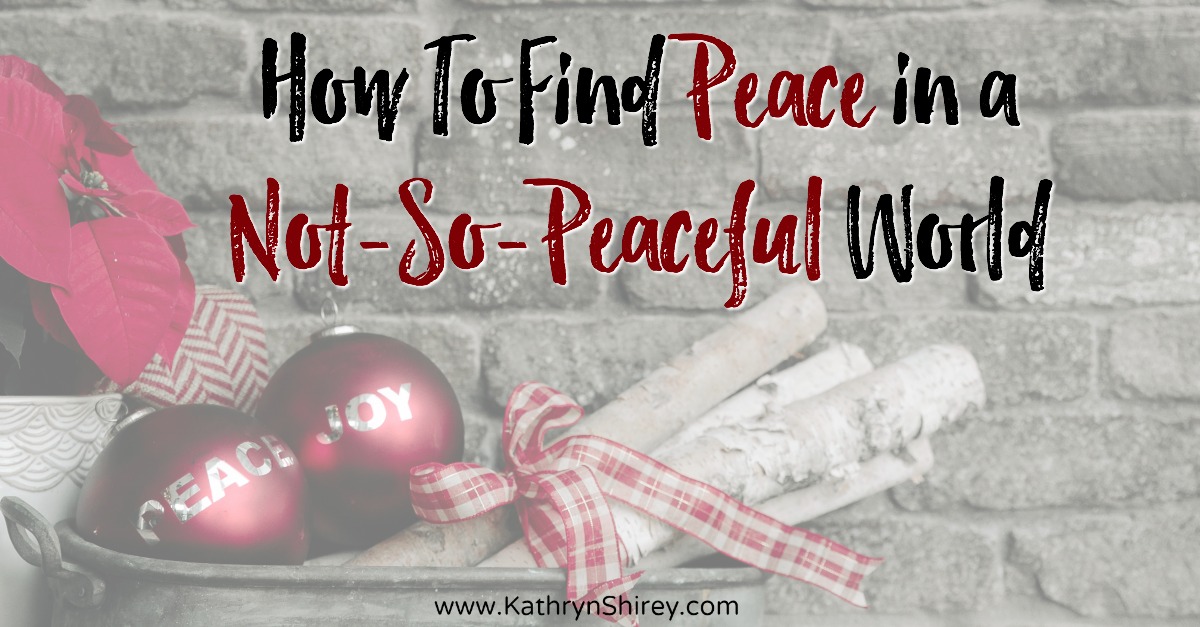 My children were given a Christmas book called “Listen to the Silent Night” when they were younger. This book explored all the sounds of Christmas night (the cattle in the barn, the sound of footsteps on the road, the knocking on the innkeeper’s door, etc). “It was not such a silent night,” the book reminds us.

As I read it with my children, I realized how romanticized my images of that night were. Images formed from carols and Christmas pageants of a quiet evening filled with peace and reverence. Yet, how could it have been?

How peaceful was that first Christmas night?

Mary and Joseph had traveled far from home, very late into her pregnancy. When they arrived, they found no place to stay. Imagine the fear of not knowing where you’ll stay, especially knowing the baby must be coming soon.

Who would help with the delivery?

Where would they find a midwife in this unfamiliar place?

What if something went wrong?

Would anyone even help this outcast couple, this unwed, pregnant teen?

Would the birth be something special to signify the fulfillment of God’s word?

I imagine them both wondering if they’d get some confirmation of what the angel had told them nine months earlier about this child. 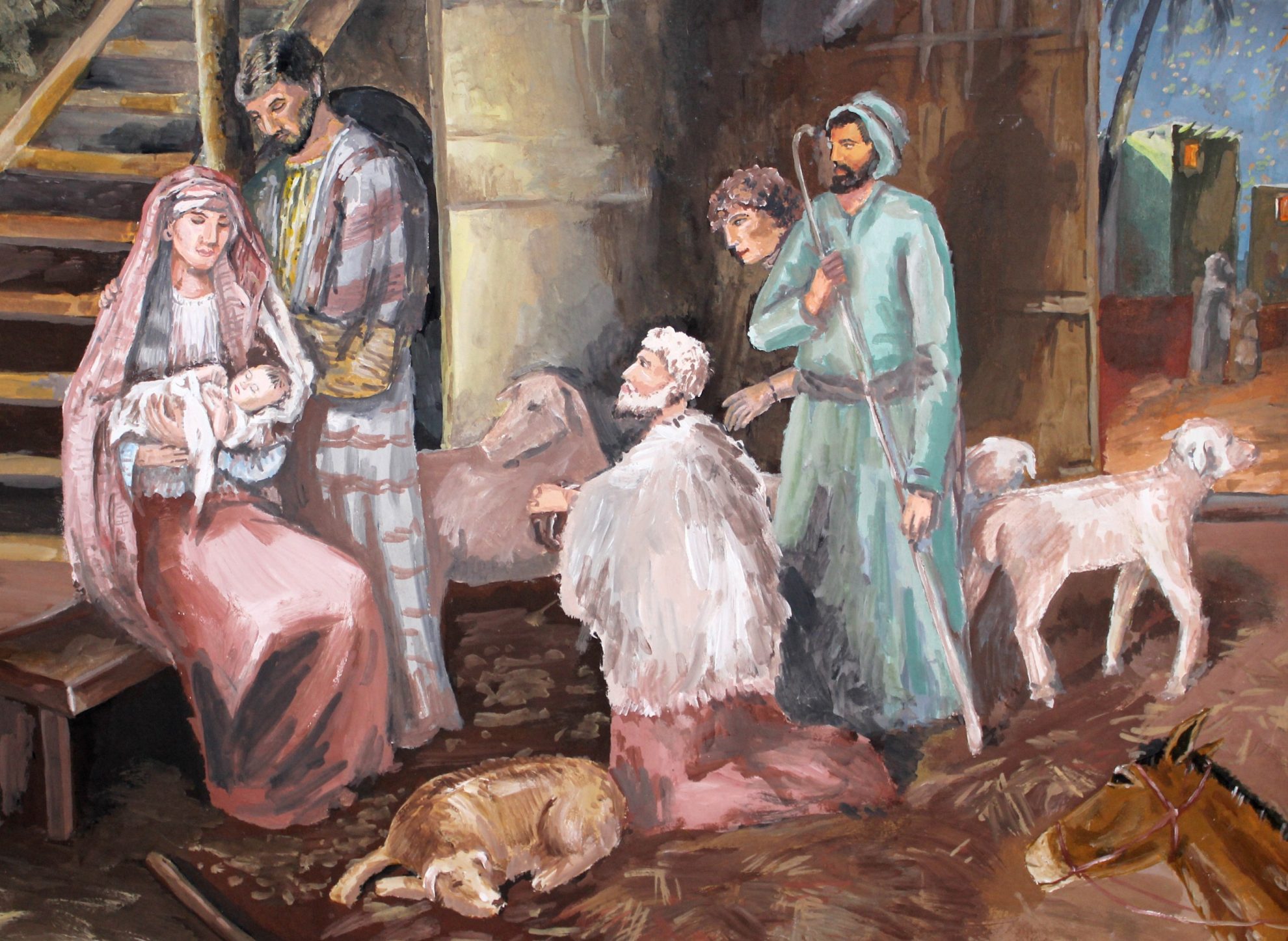 How do we find the peace promised by the host of angels the night Jesus was born?

How do we find Advent peace in a world full of turmoil?

As we light the 2nd candle on the Advent wreath this week, let’s listen closely to the nativity story as told in Matthew 1:18-25 and Luke 2:1-21. Listen for how peace prevailed over uncertainty, doubt, and fear. Together, we’ll unpack three ways you can find this Advent peace in a world that’s anything but peace-filled! 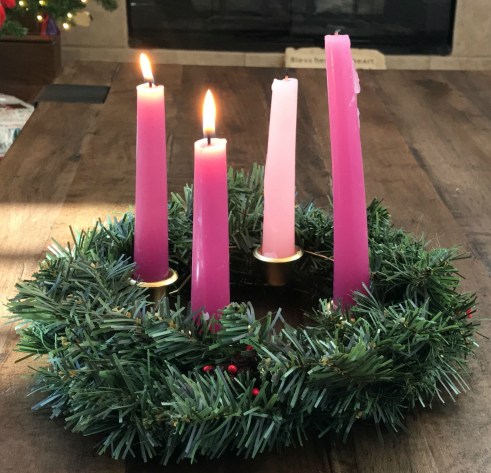 Mary and Joseph had unshakeable trust in God’s Word, so much so that they were willing to face significant social backlash for their decisions.

Imagine the faith it took to tell your family, your fiancé, his family, and your neighbors that you – an engaged teenager, a virgin – were pregnant with the son of God. Imagine their disbelief, disappointment, and despair.

“Mary, don’t lie like this to cover up an indiscretion.” “Mary, come on, we know you must have gotten pregnant from another boy in town.” “No, really, an angel appeared and told me I was going to carry the child of God.”

Imagine the faith it took for Joseph to stay with her.

“Joseph, what kind of marriage will this be?” “Do you really want to be a father to someone else’s child?” “How can you trust this girl?” “It’s not too late to move on and start over.”

Yet, both must have thought, how can I trust anyone else but the angel? This had to be something different, something special, so how could they turn their back on the angel who visited each of them. How could they not trust in God’s Word?

Trust in God’s Word brought them a peace to boldly face the world and their uncertain future together. 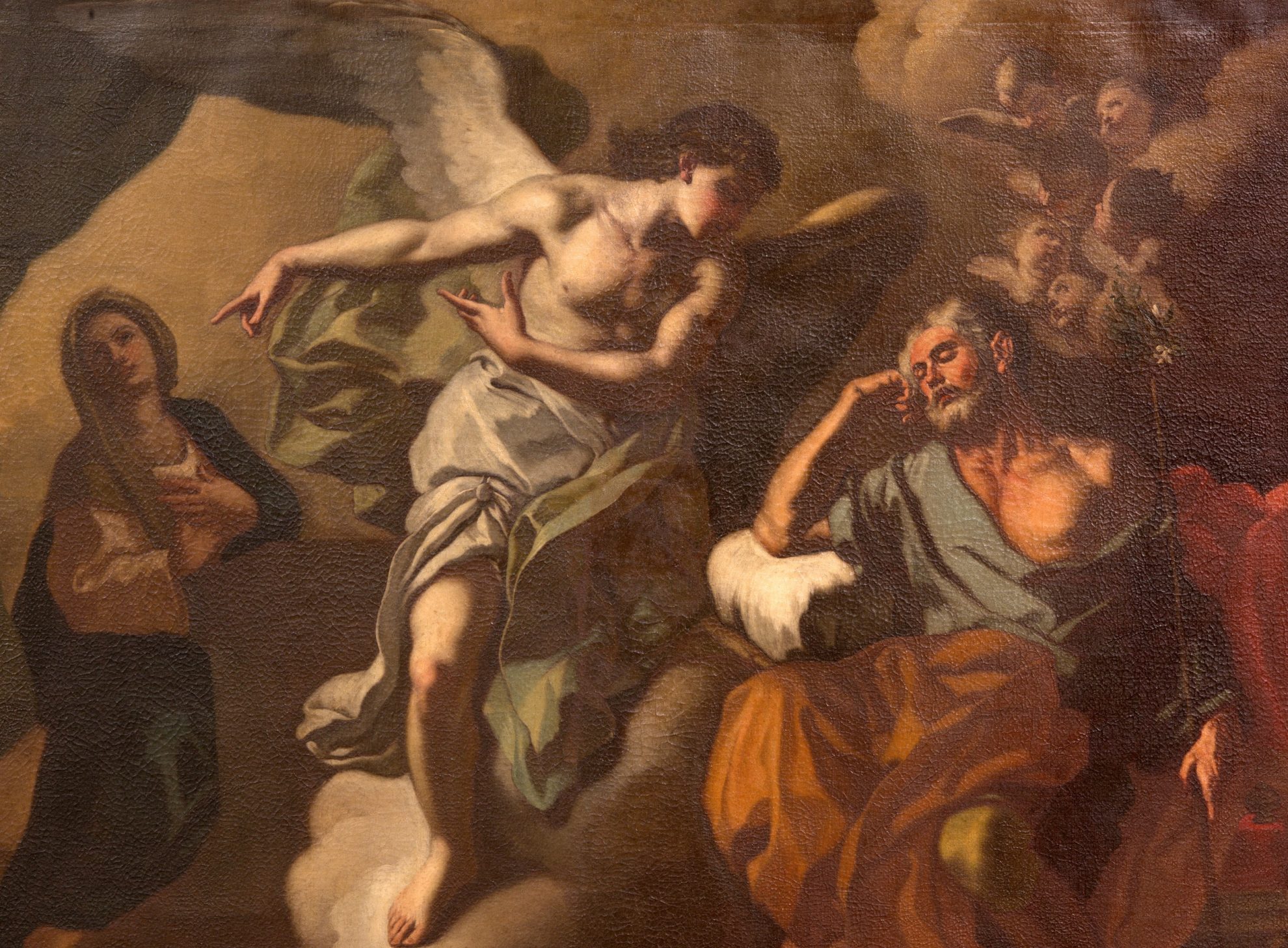 This is how the birth of Jesus the Messiah came about: His mother Mary was pledged to be married to Joseph, but before they came together, she was found to be pregnant through the Holy Spirit. Because Joseph her husband was faithful to the law, and yet did not want to expose her to public disgrace, he had in mind to divorce her quietly.

But after he had considered this, an angel of the Lord appeared to him in a dream and said, “Joseph son of David, do not be afraid to take Mary home as your wife, because what is conceived in her is from the Holy Spirit. She will give birth to a son, and you are to give him the name Jesus, because he will save his people from their sins.”

All this took place to fulfill what the Lord had said through the prophet: “The virgin will conceive and give birth to a son, and they will call him Immanuel” (which means “God with us”).

When Joseph woke up, he did what the angel of the Lord had commanded him and took Mary home as his wife. But he did not consummate their marriage until she gave birth to a son. And he gave him the name Jesus. (Matthew 1:18-25 (ESV))

The night of Jesus’ birth, God showed up in big ways. He didn’t just send a card congratulating the new family. He sent a host of angels proclaiming the birth of Jesus from the heavens. The truth of his Word born as a baby that night. The presence of God unmistakable to Mary, Joseph, and the shepherds.

How would you have reacted if you’d been with the shepherds that night as angels appeared proclaiming the birth of Jesus?

Would you have kept the experience to yourself, worried people would call you crazy for talking about seeing angels and hearing voices? Would you have stayed in the fields, worried about abandoning your post for some fool’s errand to see if there really was a special baby in town? 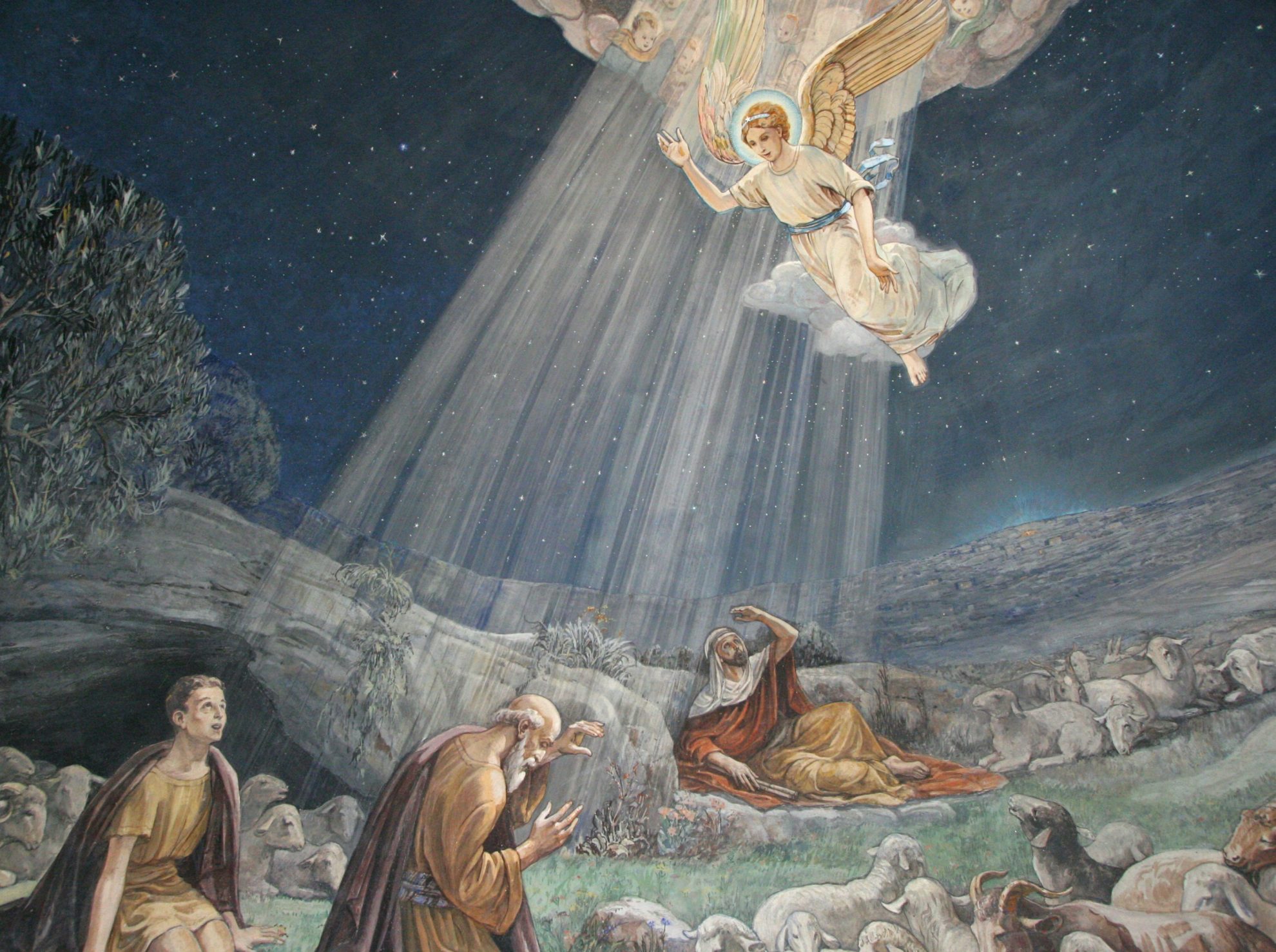 In those days Caesar Augustus issued a decree that a census should be taken of the entire Roman world. (This was the first census that took place while Quirinius was governor of Syria.) And everyone went to their own town to register.

So Joseph also went up from the town of Nazareth in Galilee to Judea, to Bethlehem the town of David, because he belonged to the house and line of David. He went there to register with Mary, who was pledged to be married to him and was expecting a child. While they were there, the time came for the baby to be born, and she gave birth to her firstborn, a son. She wrapped him in cloths and placed him in a manger, because there was no guest room available for them.

And there were shepherds living out in the fields nearby, keeping watch over their flocks at night. An angel of the Lord appeared to them, and the glory of the Lord shone around them, and they were terrified. But the angel said to them, “Do not be afraid. I bring you good news that will cause great joy for all the people. Today in the town of David a Savior has been born to you; he is the Messiah, the Lord. This will be a sign to you: You will find a baby wrapped in cloths and lying in a manger.”

Suddenly a great company of the heavenly host appeared with the angel, praising God and saying,

“Glory to God in the highest heaven,
and on earth peace to those on whom his favor rests.”

When the angels had left them and gone into heaven, the shepherds said to one another, “Let’s go to Bethlehem and see this thing that has happened, which the Lord has told us about.”

So they hurried off and found Mary and Joseph, and the baby, who was lying in the manger. When they had seen him, they spread the word concerning what had been told them about this child, and all who heard it were amazed at what the shepherds said to them. But Mary treasured up all these things and pondered them in her heart. The shepherds returned, glorifying and praising God for all the things they had heard and seen, which were just as they had been told. (Luke 2:1-21 (ESV))

The shepherds were so convicted after the angels’ appearance that they rushed off to Bethlehem to find the baby. They praised God and shared their experience with everyone who would listen.

Peace came through praising God and sharing his greatness with others.

Throughout the story of Jesus’ birth, we’re reminded how well Mary, Joseph, and even the shepherds knew God’s Word. They’d studied the scriptures and knew the prophecies. They knew of God’s faithfulness in the past, enough to trust him in the future.

They knew Jesus wasn’t just a special baby who had angels proclaiming his birth. He was the Messiah, the one the Israelites had been waiting on for centuries. They knew this because they knew the scriptures and kept God’s words close.

We’re told that Mary treasured each moment and pondered them in her heart. She made her own mental scrapbook of each sign from God. I imagine her opening that scrapbook and reliving those moments each time she faced uncertainty and doubt, each time her life began to face trials. She kept God’s words close in her heart, pondering them and remembering all God was doing in her life.

“Mary treasured up all these things and pondered them in her heart.” (Luke 2:19)

Know his promises and claim them for yourself. Know what God has done in the past and believe he’s still at work in powerful ways today in the world and in your life. 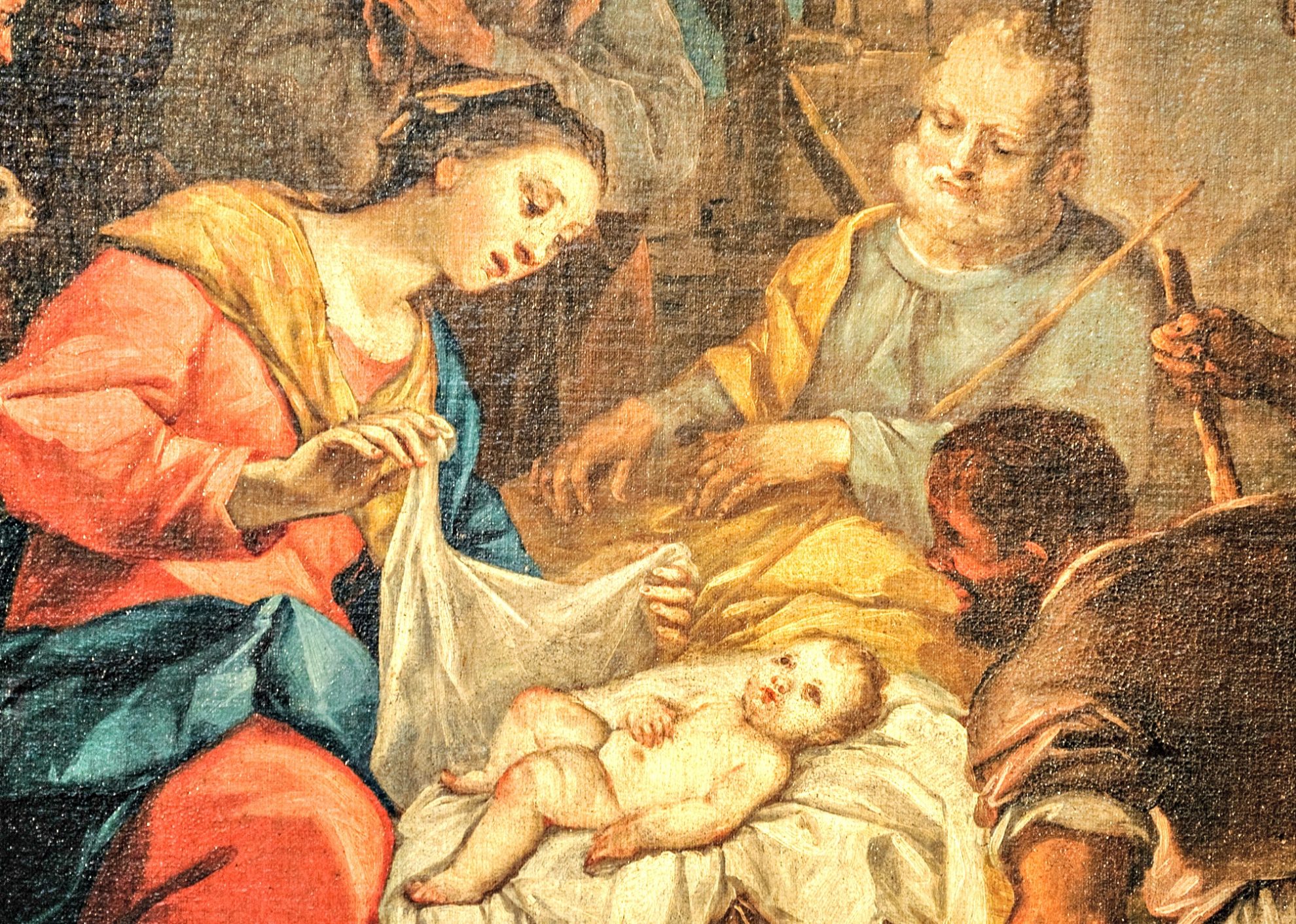 What threatens to steal your peace?

Take hope from Mary and Joseph and look for the peace they found in that not-so-silent-night.

This may be a not-so-peaceful world, but our hearts can find peace when we place our trust in God.

Remember God’s faithfulness, praise his name, trust in his goodness.

Rejoice in the Lord always. I will say it again: Rejoice! Let your gentleness be evident to all. The Lord is near. Do not be anxious about anything, but in every situation, by prayer and petition, with thanksgiving, present your requests to God. And the peace of God, which transcends all understanding, will guard your hearts and your minds in Christ Jesus.

Finally, brothers and sisters, whatever is true, whatever is noble, whatever is right, whatever is pure, whatever is lovely, whatever is admirable – if anything is excellent or praiseworthy – think about such things. Whatever you have learned or received or heart from me, or seen in me – put it into practice. And the God of peace will be with you. (Philippians 4:4-9 (NIV)) 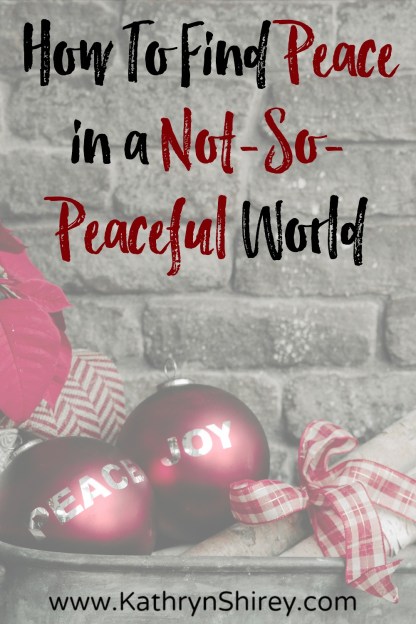 Unwrap the Best Gifts of Christmas

Want to unwrap more peace this Christmas? The Gift of Christmas daily Advent devotional will help you not only find more peace in this season of Christmas, but also open the gifts of hope, joy, and love of Jesus. Slow down and savor the meaning of the season, opening the best gifts God has waiting for you. 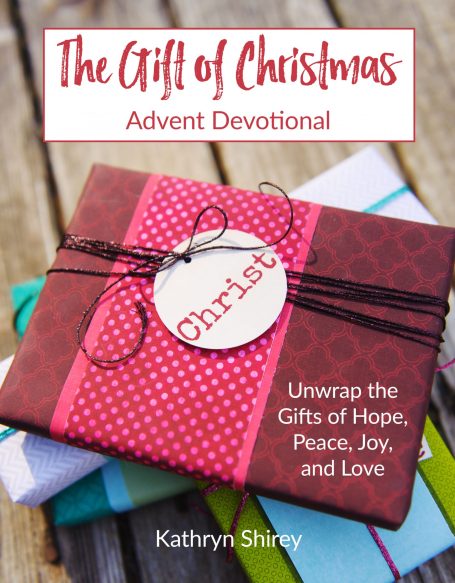 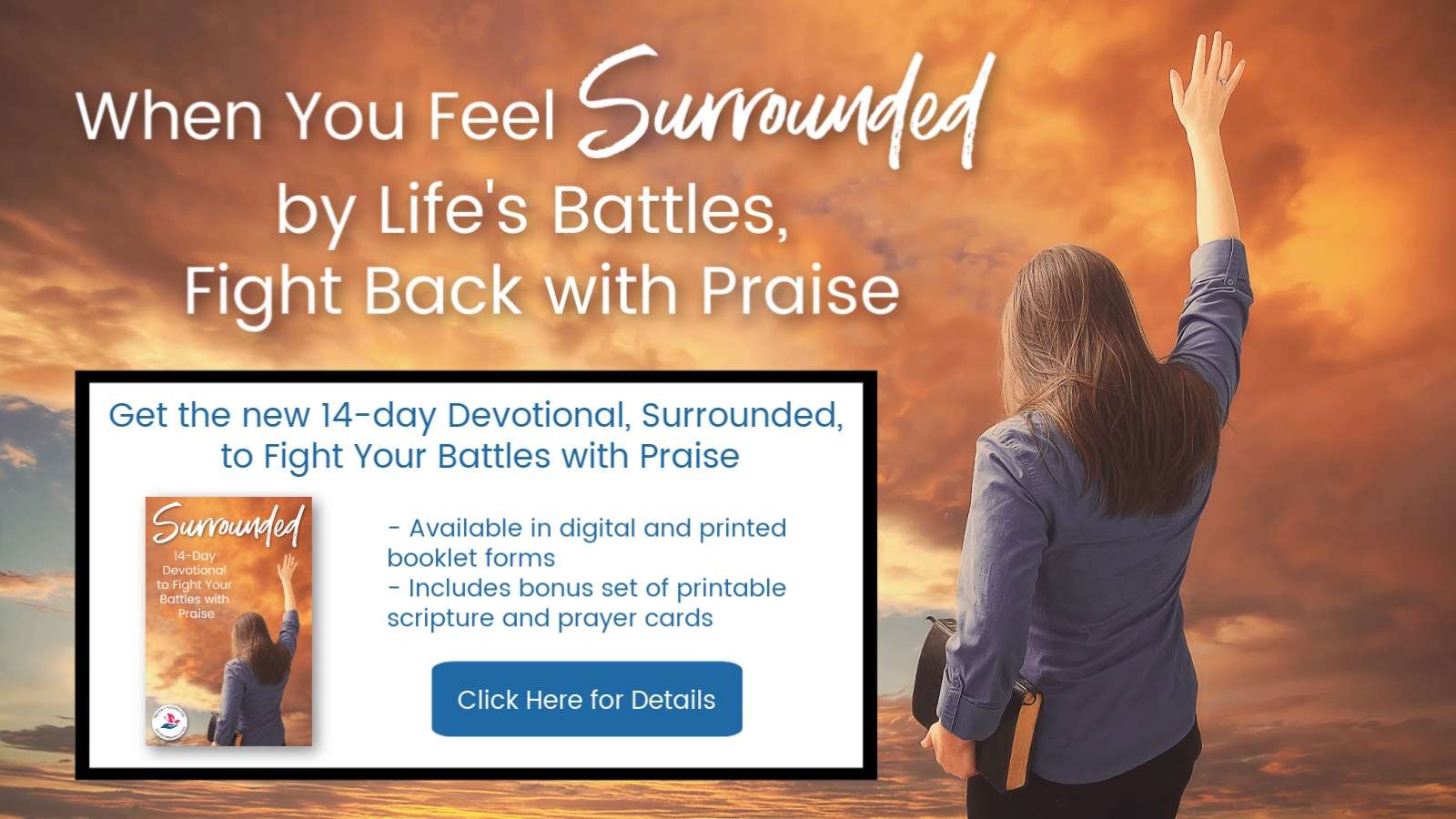 Sign up today for weekly prayers and spiritual encouragement!

Previous Post: « 3 Reasons to Trust in God When He Says “Not Yet”
Next Post: 3 Steps to Living a Joy-Filled Life »

Ready to Ignite Your Faith?

Join 16,000+ others in the Prayer & Possibilities community for weekly prayer and spiritual encouragement.

Ready to Ignite Your Prayers?

Ignite your prayer life with these 20+ ways to pray. Free printable prayer cards as my gift to you when you join our 'Prayers + Possibilities' newsletter for weekly prayer and spiritual encouragement. Join the 'Prayer and Possibilities' weekly newsletter to deepen your prayer life and find renewed hope through God. As a thank you, I'll send you these FREE Pray Deep Prayer Cards. Ignite your prayer life by exploring over 20 different ways to pray.
** No spam ever - only faith-filled encouragement. Disclosure & Privacy Policy
Lent Begins Feb. 26th. Prepare Your Heart is the perfect devo. Order today!LEARN MORE